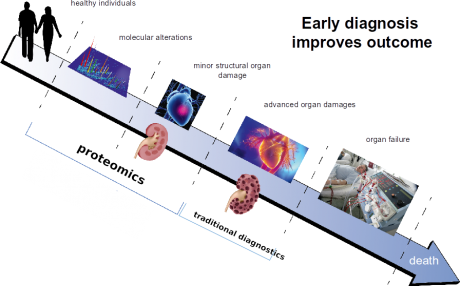 In an effort to encourage the application of biomarkers in CKD, the US Food and Drug administration (FDA) issued a ‘Letter-of-Support’ (https://www.fda.gov/media/98846/download) for a biomarker panel based on 273 urinary peptides that allows early detection of diabetic nephropathy and prognosis of progression. This biomarker panel, called CKD273, has been developed as a result of a multi-center European effort, and demonstrated validity in several recent studies, reviewed in e.g. [1;2].

FDA acknowledges that CKD is a major health problem, especially in type 2 diabetes, and states that risk assessment based on available clinical parameters is insufficient, particularly in patients with early stages of disease. The proposed CKD273 biomarker panel enriches clinical trials of early stage diabetic kidney disease with patients who are more likely to progress. The CKD273 biomarkers originate among others from collagen and alpha-1-antitrypsin, proteins which are linked to fibrosis and inflammation, processes that are thought to be of high relevance in CKD progression.

The FDA as the leading regulatory agency is actively supporting efforts to improve the situation of CKD patients especially at early stages of the disease. Biomarkers will likely play a significant role in addressing especially chronic disease, ideally at a point in time where the damage to the organ is still reversible.

Issuing of this letter was sparked by data recently published in NDT: in a study encompassing 2672 patients, this biomarker performed significantly better than albuminuria in detecting progressors in early stage CKD [3].

CKD273 is already implemented in the PRIORITY study (www.eu-priority.org), a large multicentre RCT aiming at targeted intervention in very early stages of diabetic nephropathy with spironolactone [4].

Pilot study reporting on a non-invasive biomarker model to distinguish between insignificant and significant prostate cancer (PCa) was awarded with BJU International Prize for the best academic paper!

Approx. 400,000 European men develop prostate cancer every year. The currently used simple PSA screening tests have the strong disadvantage that they also detect insignificant prostate cancer (i.e. unlikely to progress in the absence of treatment) and therefore cause over-diagnosis and costly overtreatment.

In an effort to address the clinical needs for discrimination of insignificant and significant prostate cancer (i.e. life-threatening disease in the absence of treatment), we aim at developing a non-invasive, multiple marker test. Collaborative effort of the CRUK Beatson Institute (Glasgow) and Mosaiques Diagnostics GmbH (Germany) resulted in identification of the urinary peptide signature indicative of insignificant disease.

Preliminary analysis of 236 urine samples using capillary-electrophoresis coupled to mass spectrometry (CE-MS) allowed for identification of 94 differentially excreted urinary biomarkers. Established model showed a discriminatory capacity of 82%, being superior to the classification of individuals based on the PSA level (71%). This findings were initially validated in the independent cohort of 167 patients, showing a discriminatory capacity of 66%. Developed model is comprised of numerous Collagen fragments, which were found substantially increased in significant prostate cancer, possibly indicating tissue invasion. Therefore, defined biomarkers likely reflect the underlying pathophysiology of prostate cancer. Based on this data a novel high throughput one-step CE-MS urine test will be developed to provide a highly sensitive and non-invasive pre-treatment diagnostic test for prostate cancer.